"In the beginning, there was the road." This quote by J. Bédier, cited in the text of the Centro Studi Chiantigiani of Radda, serves to introduce a small account of the genesis of the medieval village of San Donato in Poggio. 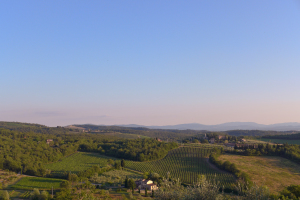 As Dr. Renato Stopani (president of the aforementioned study center in 1989) maintains, "the existence of a communication route of ancient and uncertain origin, which served as a link between Florence and Siena, is in fact at the origin of the establishment of both the Pieve andthe Castle of San Donato, two settlements of different nature that both polarized and organized a part of the territory that extends to the horsemen of the hills that serve as a watershed between Val d'Elsa and Val di Pesa. The name of San Donato in Poggio derives from the denomination of the Romanesque Pieve remembered since 989 with the name of "in loco pocie". "Pocie" and later "Poci" was the name of the village built, perhaps since the Roman period, on a hill of the watershed between these valleys. Thename was later transformed into "Poggio" because of the physical characteristics of the place. The village soon became a fortified castle worthy of the name of "castrum" fortified since 1033. The castle seems to have enjoyed certain autonomy and seems to have been constituted in a free commune after belonging to the family of the Conti Guidi, powerful feudatories, allies of the emperor.
Valiant men of this castle participated to the side of the Florentines in the main war enterprises of the XII and XIII centuries. In 1218 the castle was definitively subjected to the Republic of Florence and for all the half of the XIII century, the castle of San Donato assumed considerable strategic importance as a link between Florence and Siena, given its central and direct position on the Roman road Via Cassia. Some more curiosities: Florentines and Sienese met in San Donato to stipulate important pacts in 1176; in 1260 in the same castle the Florentine army gathered and organized itself against the Sienese Republic before the famous Battle of Montaperti, also mentioned by Dante in the Inferno. In the early fourteenth century, San Donato was placed at the head of the League of Chianti, led by a podestà sent by the Republic of Florence. The Pretorio Palace, the seat of the league, was located in the current Malaspina Palace (ex Palazzo Ticci). The fortune of the town began to decline between the end of the 14th and 15th centuries, when the road layout of the Cassia Roman Road between Sambuca and Morrocco became more important, passing through Tavarnelle and Barberino to reach the large centers of Valdelsa. The Castle of San Donato in Poggio still appears today in the urbanistic conformation, with the characteristic small streets that twist inside the houses, assumed in the XIII and XIV centuries: inside the walls, it results densely built with notable emergencies, such as a high tower-cassette, in the square, the palace Ticci, then Malaspina, and the gothic church of Santa Maria della Neve. At the center of the main square, there is a well, hexagonal in shape, with an underlying cistern with an extension equal to that of the entire square, which in the past was the only water supply of the village. Outside the fortifications, out of the Porta Senese, appears the medieval village concluded by the Oratory. The Pieve di San Donato is of considerable architectural interest. It is built in Tuscan Romanesque style, with an ancient bell tower and three naves ending in three semicircular apses. Recorded in documents since 989, it preserves inside a wooden crucifix on wood, a baptismal font in glazed terracotta by Giovanni della Robbia dated 1513, and a marble stoup. Not far from the medieval village there is the sanctuary of Santa Maria delle Grazie in Pietracupa, built in the place where there was a tabernacle with a representation of the Virgin with Child considered miraculous. The painting has been recently revalued by critics and attributed to the school of Masaccio. It is kept inside the sanctuary itself.
By the Pro loco of San Donato in Poggiowww.sandonatoinpoggio.it