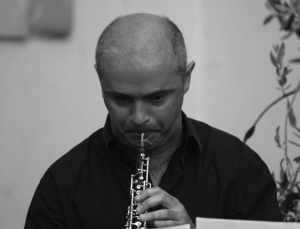 Luca Avanzi was born in 1963 in Milan. He studied oboe with Bourgue, Calderoni, Grazzi, and attended the classes of Molino, Garbarino and Laganà.

Since 1978 he began to collect successes and awards, winning numerous national and international competitions, Cesena, Manta, Pomeriggi Musicali, up to the recent Venice 1995 and Pavia 1996.

He performs both as a soloist and as a chamber musician, having behind him a remarkable career as Principal Oboe; he was, in fact, the Oboe at the Teatro alla Scala in Milan from 1984 to 1986, the Oboe with the Orchestra Nazionale della RAI in Turin from 1985 to 1987, the Oboe at the Pomeriggi Musicali in Milan from 1988 to 1994. He was one of the first Italian instrumentalists of the E.C.Y.O. in 1981-83, the first European youth orchestra of the highest level; he has been conducted by Abbado, Bernstein, Maazel, Giulini, Barenboim, Gatti, Pretre, Sawallisch, Dorati. He has performed most of the solo repertoire with orchestra: we remember in 1982 the Concerto of R. Strauss with RAI Milan and in 1981 with the Pomeriggi Musicali, the Concert of W.A.Mozart in 1986 and 1988, concerts by Haydn, Marcello, Vivaldi, Leclair, Bach, Barber, Donatoni, Mozart Concertante, etc. and has recorded a CD for Stradivarius of 18th century Italian Oboe Concertos (Platti, Sammartini, Hasse, Dall'Abaco).

His inexhaustible interest in wind instruments (he also plays the flute and the clarinet), has led him to explore the possibilities of the baroque oboe, starting with P. Grazzi in 1984 and continuing with A. Bernardini and S. Toni; with the latter, he contributed to the ensemble Silete Venti!

He has collaborated with various artists of the sector, G. Nasillo, F. Biondi, R. Gini, and others. He has been working for a long time in duo with A. Ballista and has always collaborated with the most important Italian and foreign chamber music institutions, such as Nieuw Ensemble Amsterdam, Divertimento Ensemble, Novecento e oltre, Nuove Sincronie, Musica Rara, Musica Insieme di Cremona, Ensemble Garbarino, Novurgia.

Many composers have dedicated first works to him: among them N.Castiglioni (Rima per oboe e piano), P.Molino, S. Gorli, D. Anzaghi; recently he performed "Oboe sommerso" by E. Carter in the first Italian performance, the 1st Concerto for oboe and ensemble by B. Maderna at the Venice Biennale and Festina Lente for oboe and ensemble by R. Rivolta in world premiere. In 1998 he collaborated on the CD "Vivaldi; the meeting" together with the well-known Cuban percussionist Dave Lombardo, in which he alternates well-known Vivaldi melodies with improvisations of a jazz nature.

Since 1990 he has published several reviews on the prestigious magazine MUSICA and currently he teaches Oboe at the Conservatory of Milan.