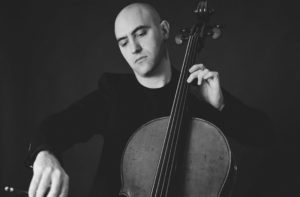 Born in Buenos Aires, cellist Fernando Caida Greco was a pupil of Jorge Schultis, Rocco Filippini, and Ivan Monighetti. Winner of prestigious prizes in international competitions, in 2002 he was unanimously awarded the first prize at the "V. Bucchi" Competition in Rome, a recognition that led him to perform in the most important concert seasons. As a soloist, he has performed with important orchestras (Sinfonie - Orchestre of Basel, the Ensemble "Alla Corda" of Zurich, the Warsaw Philharmonic Orchestra, the Neues Orchester Basel, the Orchestra dei Pomeriggi Musicali of Milan), collaborating with important conductors such as Gilberto Serembe, Andrea Battistoni, Donato Renzetti. He has given concerts throughout Europe, China, the United States, and Canada, often performing premiere pieces dedicated to him and making numerous radio and television recordings. A passionate scholar of the treatises of all ages, he performs with original instruments both for the execution of the historical repertoire and for the modern and contemporary ones, giving lectures and Masterclasses on the subject. He collaborates with artists such as Salvatore Accardo, Sergio Azzolini, Laura De Fusco, Edoardo Torbianelli, Francesco Manara, Pierre - André Taillard, Enrico Onofri, Oscar Ghiglia, Bruno Giuranna, Franco Petracchi, Rocco Filippini, Paolo Bordoni, Andrea Bacchetti. He teaches Chamber Music at the Conservatory of Piacenza.