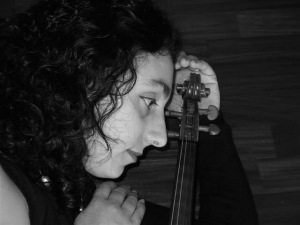 After completing her diploma at the “G. Verdi” Conservatory of Milan, her home town, with full marks and honors, Maria Ronchini carried on her studies at the “W. Stauffer” Academy of Cremona with B. Giuranna and at the Chigiana Academy of Siena with Y. Bashmet, obtaining various scholarships and merit diplomas. She also took part in masterclasses with W. Christ at Lubecca and K. Kashkashian in Luxembourg. Winner at a very young age of numerous competitions, ‘E. Minetti’ of Milan, ‘Vittorio Veneto’ Prize, ‘City of Palermo’ competition, for many years Maria was a member of the ECYO orchestra directed by Abbado, Bamert, Leinsdorf and Ashkenazy.

Maria gave her solo debut in Milan performing a concerto of Bartók with the RAI Orchestra at the Conservatory’s Sala Verdi in Milan, followed by performances for Società dei Concerti, Serate Musicali, the Humanitarian Society of Milan, Ente Triennale of Cremona, the Roman Philharmonic Academy, IUC of Rome, Amici della Musica of Florence and Perugia, the Philharmonic Society of Trento and Pietà dei Turchini of Naples.

Maria has been invited to participate at the International Festival of Cremona, the Festival delle Nazioni of the City of Castello, the Schleswig Holstein Music Festival, Bad Kissinger Sommer, Festespiele Mecklenburg-Vorpommern, Festival of Blonay at the prestigious ‘P. Hindemith’ Foundation. She alternates between solo recitals and chamber music performing with other artists including S. Accardo, M. Sirbu, V. Repin, B. Giuranna and B. Pergamenschikov.

She formed the ‘Ronchini Quartet’ together with her brothers with whom she attended the chamber music masterclass at Duino of ‘Trio di Trieste’. Their quartet was very well received by the press and performed in numerous concerts during 1995 – 2004: Società dei Concerti of Milan, live for Radio Tre at the Salone della Musica of Turin, Teatro Rossetti of Trieste, Palazzo Ducale of Genoa, Ass. Lipizer of Gorizia, the International Festival of Chamber Music at Asolo, the Municipal Theatre of Modena, the Romanini Foundation of Brescia, the Kiev Conservatory, Lugano and Keizersgrachtkerk of Amsterdam.

Maria has a profound interest for contemporary music and has been a member of ‘Divertimento Ensemble’ directed by S. Gorli. Maria has played as soloist with the ensemble for Radio SFB of Berlin, the Biennale of Venice, Villa Reale of Monza, Palazzina Liberty of Milan, including debut performances of pieces written for her by G. Castagnoli, L. Mosca, M. Betta, Y. Sugiyama, M. Franceschini, M. Pisati and collaborating with various composers including Donatoni, Francesconi, Gervasoni, Kurtag, Jarrell, Mantovani and Solbiati.

Maria has toured worldwide for many years with the ‘Solisti Veneti’. Since 2001, she has been invited to perform at the Milan Conservatory’s Sala Verdi as a soloist by the UECO orchestra, with whom she has performed a number of solo pieces including: ‘Sonata for Grand Viola’ of Paganini, ‘Sinfonia Concertante’ of Mozart, works of Stamitz, Telemann, ‘Hungarian Andante and Rondo’ of Weber, ‘Trauermusik’ of Hindemith and ‘Lachrimae’ of Britten.

Maria is the viola player of ‘Quartetto Aglaia’, which is very active in the research for unpublished manuscripts of different repertoires from early music to the classical period to be interpreted on original instruments.

Maria has made recordings for Stradivarius and Jecklin of Zurich. She has taught at the Civic School of Music of Milan, and having passed the ministerial exams, started in 1994 her teaching activities at music conservatories.

Maria is currently Professor of viola at the “G. Cantelli” Conservatory of Novara.